The stars batted their eyelashes, tossed their heads and huffed, but were quickly satisfied when adoring fans offered handfuls of pellets.

The reindeer at Leavenworth Reindeer Farm might be celebrities, but they are still eager to accept willow branches and tasty tidbits from the thousands of admirers who visit them each year in central Washington.

“They are movie stars now, but they haven’t let it go to their heads,” says farm manager Erika Bowie. “They are still as humble as ever.”

The reindeer are featured in an upcoming Christmas movie and an Amazon Studios romantic comedy, took center stage in the popular online educational show “Blippi” and have auditioned for supporting roles in a FedEx commercial. Farm staff have been busy putting the reindeer through their paces to determine which are most cooperative in front of the camera.

Leavenworth Reindeer Farm is tucked into the Cascade Mountains near Leavenworth, Wash. (population 2,375), which draws visitors from around the world to its Bavarian-style village. The reindeer first came to town in 2016.

Hans and Kari Andersen, who raised draft horses to pull carriages for tourists in the town’s tiny downtown, had included their horses at the holiday parade a few years earlier, but rain prevented the reindeer mascot from being on hand to help Santa. Hans jokingly told Santa he would make sure real reindeer were there in the future. Bowie, the couple's daughter, recalls her mom got a twinkle in her eye and vowed to make that happen.

The Andersens are of Norwegian descent and had often seen reindeer when they traveled to Norway. They began researching what it would take to bring reindeer to Leavenworth year-round.

Weather wasn’t an issue, since Leavenworth’s climate is perfect for reindeer. It sits at the same latitude as Mongolia, where reindeer live wild. The biggest challenge proved to be the logistics of bringing reindeer into Washington. Finally, six reindeer took a six-day ferry ride from Palmer, Alaska, to Bellingham, Wash., steering clear of Canadian waters due to shipping regulations regarding reindeer in Canada.

Leavenworth Reindeer Farm is the only reindeer farm in the lower 48 states open to the public year-round, although it closes to visitors in March when reindeer are shedding their antlers and winter coats, which gives the staff time to perform annual farm maintenance during the snow melt. It reopens when the first calves start appearing in April.

The herd has grown from the original six reindeer to 23. Most were born on the farm, but the Andersens have flown several in from Alaska to diversify bloodlines.

Elsa, the reigning queen of the herd, is 8½ years old. Bowie says reindeer usually live to be 12 to 15 years old in captivity. The family has sold reindeer to new owners in several states, but are very selective, only selling reindeer in family groups.

Not only is Leavenworth well situated for a reindeer farm, but the surrounding area has abundant natural food sources for the reindeer. They love to eat fireweed, willow, lichen, moss, birch, aspen, cottonwood, mushrooms and dandelions. Visitors are given willow branches during summer visits to go “fishing” for reindeer. The farm supplements the herd’s diet with reindeer pellets manufactured by CHS Animal Nutrition in its feed mills in Harrisburg and Hermiston, Ore. They buy the pellets from Payback® feeds dealer Cyon Livestock Solutions, Sunnyside, Wash.

Managing nutrition, genetics and biosecurity are critical to the Leavenworth Reindeer Farm, Bowie says. As owners of the USDA-certified facility, Kari and Hans take the health of their reindeer seriously. Visitors are only allowed to tour the farm by appointment. Staff members screen visitors to make sure no one has been in contact with sheep or goats 48 hours prior to visiting, since sheep and goats may carry a virus called malignant catarrhal fever, which can be deadly to reindeer. Hand sanitizer is used liberally and all visitors’ shoes are sanitized before they enter reindeer pens.

The farm has grown from a side hustle into a thriving livestock operation that supports the entire Andersen family plus several local residents. Hans retired from his job as a county sheriff’s deputy to work on the farm full-time. Bowie and her husband moved from Snohomish County in Washington to manage the farm. Bowie’s sister, Kjerstin, is the farm’s chef, feeding the crew, which doubles to 20 with seasonal workers over the winter months. Bowie’s brother, Kristian, works with the farm’s horse and carriage business. Another sister, Kristina, lives in Arlington, Wash., and creates candles, wax melts and lip balms to sell in the farm’s gift shop.

Amy Bossen worked in health care before joining the farm crew in 2017 and is a full-time staff member.

“The reindeer are so cool,” she says. “I get to learn something new every single day from them.”

Education is an important part of each farm tour. Every visit starts with a presentation on the species’ amazing adaptations.

“People can appreciate reindeer much more if they know more about them,” Kari says. “They are such unique animals.”

Hans adds, “Reindeer are the most highly accessorized creatures on the planet.” 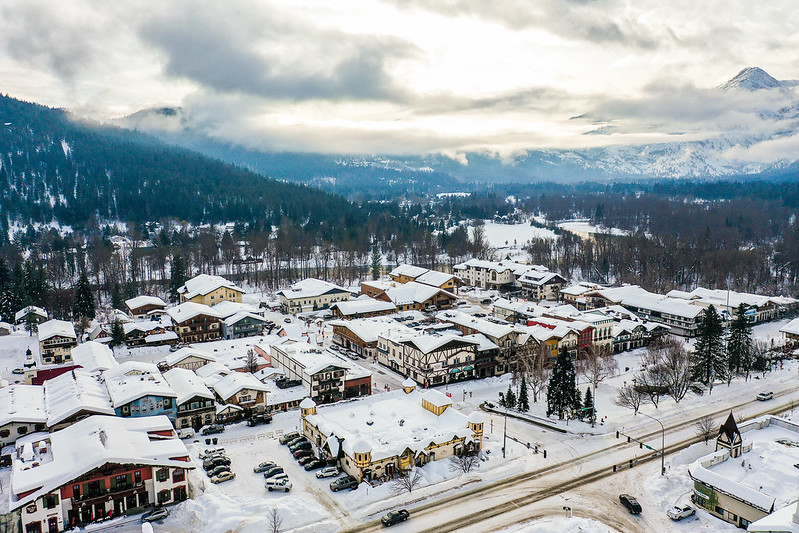 Check out the full Winter 2022 issue of C magazine with this article and more.